A long-ass post answering some setting issues for Legacy of the Bieth!

What is the deal with my cleric's religion?
The dominant religion in the region is that of ar-Rahman (think a Church of Law). There is grudging tolerance for the worship of other deities, who are collectively called "The Many" by Ar-Rahman's faithful.

Where can we go to buy standard equipment?
The souq is the big open-air marketplace in Sanctuary where you can pick up 'most anything that you need.

Where can we go to get platemail custom fitted for this monster I just befriended?
You can't get any platemail at all around Sanctuary, unfortunately. You can get some leather or chain barding custom made in Sanctuary probably, or you could try commissioning it at one of the smaller towns dotting the region.

Who is the mightiest wizard in the land?
Practicing magic is kind of frowned upon, so there aren't too many renowned wizards. The name of Zouman ibn Zouman (a great seer and mystic) would probably be first on people's lips.

Who is the greatest warrior in the land?
Tawnat bint Ziyad is probably the most renowned faridah (masc. faris; think a combination of ronin and gunslinger) in the region around Sanctuary, although with the continual influx of new mercenaries and adventurers, who can say?

Who is the richest person in the land?
Here it would be Umm Susa, the head of the Merchants' Association; she's been one of the chief beneficiaries of the taxes laid upon the various gold and salt caravans passing through sanctuary. Although the pirate chieftain Red Firouz might have something to say about that...

Where can we go to get some magical healing?
You can turn to the masjid of ar-Rahman, or you could seek out a priest of the Many. There are rumors that a hobgoblin sage has set up shop in one of the towers along the east side of Sanctuary, and she's reputed to be a healer as well.

Where can we go to get cures for the following conditions: poison, disease, curse, level drain, lycanthropy, polymorph, alignment change, death, undeath?
Poison can be treated by an apothecary, wise woman of the nomad tribes, or priest of some deity. Priests can deal with curses, and sometimes diseases. As for the rest, you're on your own.

Is there a magic guild my MU belongs to or that I can join in order to get more spells?
Not at all. Magic-users are a secretive lot in general.

Where can I find an alchemist, sage or other expert NPC?
Sanctuary has some chance of having experts (it depends on the field you're looking for), and the hobgoblin sage mentioned above is definitely in Sanctuary. If they're not there, you'll likely have to head back to the corelands, maybe to the capital or to the independent city of Vornheim.

Where can I hire mercenaries?
Mercenaries are showing up to Sanctuary in greater and greater numbers these days - partially to serve as caravan guards for the caravans that run through the city, but also because conflict seems to be brewing between the Empire and some of the nomad tribes in the area. Nothing's happened yet, but tensions have been growing. There are also the Blood Moons, who are a local mercenary band/death cult.


Is there any place on the map where swords are illegal, magic is outlawed or any other notable hassles from Johnny Law?
The cities are generally more regulated, and guards will look askance at folks who are running around festooned in weaponry, but there aren't any notable hassles as such. Folks will be creeped out by the use of magic, but it's not particularly outlawed unless you start doing stupid crap like assaulting people. In which case, y'know, assault.

Which way to the nearest tavern?
Two streets down from the souk, take a right, and you're at Yahya's. Decent place, and most times the wine isn't sour.

What monsters are terrorizing the countryside sufficiently that if I kill them I will become famous?
There are always Bieth monstrosities lurching about the sands and scrublands, but there has been a rash of killings within Sanctuary itself recently. There have also been attacks by landsharks and a crystal butterfly on some caravans in recent weeks. 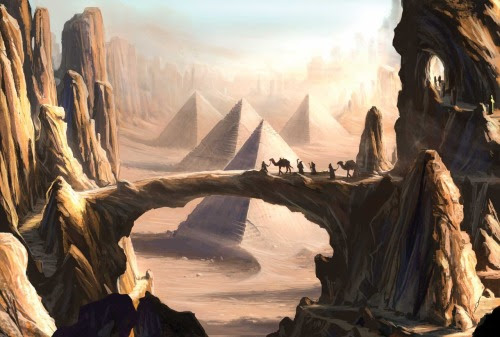 Are there any wars brewing I could go fight?
See above re: mercenaries.

How about gladiatorial arenas complete with hard-won glory and fabulous cash prizes?
None, ah, overt in Sanctuary. If you dug a bit, you might be able to find a few, but I'm not sure how fabulous the cash prizes are.

Are there any secret societies with sinister agendas I could join and/or fight?
There are murmurs of a cabal called the Circle, led by a fellow named Shafiq the Grey, but that's about it. Oh, and there are those Cultists of the Yellow Hand, nobody really knows what their deal is.

What is there to eat around here?
A typical well-to-do meal in town might include some lamb kebab with yogurt, bread, rice, and some vegetables. For the peasantry, there's less meat and more lentils involved. Well, "more" is perhaps the wrong word, since the meals are pretty meager.

Any legendary lost treasures I could be looking for?
The Bieth were said to have a series of magical wonders and terrors within their spires. It's rumored that there is a device that will reshape an individual's mind and possibly inculcate them with the knowledge of sorcery. It is also said that those who fought the Bieth created a method by which clay servitors could be animated to serve as untiring warriors. In more recent developments, the axe known as Djala Bone Hewer is said to have been lost near Sanctuary.

And via Untimately, 20 rules questions:

Ability scores generation method?
3d6 in order, straight down - but if you are FLAILSNAILing, go with whatever.

How are death and dying handled?
Being reduced to -1 HP makes you roll on the Death & Dismemberment table.

What about raising the dead?
You're outta luck, friend. Reach for your 3d6. If FLAILSNAILing you can try and resurrect the character somewhere else that you've adventured, or head to the Bleaklands.

How are replacement PCs handled?
If you have a henchman/hireling handy, you can start running them. Your new PC can join up when you get back to town.

Initiative: individual, group, or something else?
Group initiative on a d6.

Are there critical hits and fumbles? How do they work?
Yes, you crit on a 20 and fumble on a 1. Crits do max damage, and something else cool at the discretion of the GM.

Do I get any benefits for wearing a helmet?
Yes, help on the death/dismemberment table, plus any common sense bonuses.

Can I hurt my friends if I fire into melee or do something similarly silly?
A-yup. Unlike some cruel, cruel, heartless GMs, I will let you know who is in your line of fire. Did I mention cruel?

Will we need to run from some encounters, or will we be able to kill everything?
Run, little monkeys. Run.

Level-draining monsters: yes or no?
Not at this time; it seems like a hassle to deal with.

Are there going to be cases where a failed save results in PC death?
Yes.

How strictly are encumbrance & resources tracked?
Not all that strictly. I'll ask about light and so forth, but I'm not going to freak out over your equipment list unless you are being particularly egregious. "So...you brought 2 blue whales into a 10x10 room?"

What do I get experience for?
Grabbing gold and treasure. Defeating monsters. Exploring new areas that nobody has gotten to in-campaign yet.

How are traps located? Description, dice rolling, or some combination?
Anyone can find a trap through description of what they're doing and looking for. A thief can also use dice rolling as a form of "saving throw" before tripping a trap.

Are retainers encouraged and how does morale work?
Retainers are encouraged. Morale is likely going to be as per AD&D 2e rules (d20 roll, modifiers as appropriate.)

How do I identify magic items?
Just look for the blue saran wrap glow...oh, we're not playing Morrowind? Right. Look for fancy inscriptions (and particularly Bieth writing). If you don't have access to a wizard in the party, the town mage ought to be able to toss a detect magic on your stuff. For a price.

Can I buy magic items? Oh, come on: how about just potions?
Potions from the local town mage.

Can I create magic items? When and how?
Yeah, sure. I need to figure out how; it'll probably require setting up a laboratory.

What about splitting the party?
There's a song about that, you know... if you want to do it, go ahead.
Posted by Allandaros at 6:07 PM