Hideous Regeneration: The first wound a ghul suffers in a combat will cause the ghul to take an additional 1 hp damage each round. However, if the the ghul is struck again, its jinn heritage will begin healing all of its wounds with diabolical speed; it will regenerate 1d10 hp per round for the rest of the day.

Rad-touched: Ghuls are immune to the effects of anomalies and other features of the Zone.

Ghuls are mutants of the jinn - descendants of those trapped in the Zones and twisted by the horrid magicks of the Bieth. Twisted faces (always sporting twisted tusks), never-healing radiation burns, and withered limbs distort their forms. Confined to their warped and twisted physical forms, they are disdained by their jinn brethren, and feared by human city-dweller and nomad alike. Cast out from all society, pushed to the wastelands and ruins, ghuls regularly turn to banditry and slaughter to survive. Given their residence in the ruined and hollowed cities of the Zones, and the inhospitable nature of the wastes, many believe that they subsist on the vast necropolises and the corpses stored within.

Despite their ill reputation, many ghuls dream of leaving their blasted homes and joining the societies they have dimly heard of. Given their immunities to the deleterious effects of the Zone and the perilous anomalies, ghuls will occasionally strike up relationships and even alliances with those striking out into the Zone. However, they are wary and paranoid, and many an alliance has been riven apart through betrayal and fear on both sides.

Ghul bands of 20 or more have a 4 in 6 chance of being led by a rais (boss), a 6 HD ghul who can polymorph self (AEC 73) into any humanoid form three times a day. They are known to ride in great bronze chariots drawn by ostriches or eyeless dogs.

O who will bear my news to the young men of Fahm
of what I met at Riha Bitan?
Of how I met the ghul swooping down
on the desert bare and flat as a sheet?
I said to her, 'We are both worn with exhaustion,
brothers of travel, so leave my place to me!'
She sprang at me; then my hand raised
against her a polished Yemeni blade.
Then undismayed I struck her: she fell flat
prostrated on her two hands and on her throatlatch.
She said, 'Strike again!' I replied to her, 'Calm down,
mind your place! For I am indeed stouthearted.'
I lay upon her through the night
that in the morning I might see what had come to me.
Behold! Two eyes set in a hideous head,
like the head of a cat, split-tongued,
Legs like a deformed fetus, the back of a dog,
clothes of haircloth or worn-out skins! 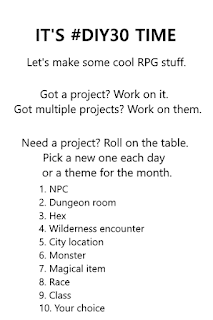